This is an interview of Robert Wade and Neal Purvis giving some informations about the next Bond..

http://www.the-trades.com/article.php?id=5168
You only live twice or so it seems..
One life for yourself and one for your dreams...And one day I realize that I was addicted to Daniel Craig's blue eyes.

That was a good piece to read, livetwice, thanks for the link. The writers have great words for Daniel.

Maybe you're just out of practice.

bond22 is set to be based on the events of Ian Fleming short novel 'risico' or something///i havent seen the vid so...be cool with me...bond 22 is set to be released into theaters late 2008 i think...they start filming later this year....and thats all i know...check out IMDB for more....
"i won't consider myself to be in trouble until i start weeping blood"
"does it look like i give a damn!?!?"
~Bond-Casino Royale
Top

I understood from the article it will not be based on Risiciso (or whatever - which I'm grateful for as it would be a real mouthful to say, especially , if like me, you're not good at pronouncing your R's) They want the story to develop from CR, and find out who Mr White is, what the organisation is behind Le Chiffe, what Vesper's boyfriend may have to do with it all etc.
Top

Thanks so much for keeping us up to date.
whatever you do it's political, and everything you do should be political- you should be trying to make a point about something. And if you can manage to do that, then you're succeeding as an artist. - Daniel Craig.
Top

What storyline would you have in the next bond film? What locations would you choose and what bad guys would you have. Apart from yourself as being the love interest for Bond what other girls would you
have. I am going to go away and have a real hard think about this one and let you know what I would come up with. 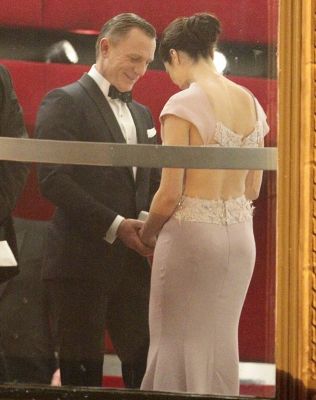 Oh well what's a Daniel fan to do? Keep talking to you girls and watching DVDS and collecting pics, etc.

I read an interview by Eva Green saying that she will either do a tape (voice over) or a brief video of Vesper for Bond 22 which will tell James why she betrayed him like she did and how she loved him. She wasn't sure which but says it will feature in the film. Have you heard of her saying this?

Is it about heroin or something and is part of filming to be in Italy. Is Martin Campbell the Director again?

Any information is welcome.

Sue
Hi there Daniel fans. Please feel free to e-mail me as I love to hear from others to keep me in touch with what's going on with Daniel!!! He is such an amazing actor, has amazing looks, those blue eyes and a sexy voice!!!
Top

I read also several articles talking about the brief come back of Vesper in Bond 22 explaining why she betrayed Bond.

Concerning the Director of the next Bond, it 's Roger Mitchell who seem to be chosen .. He already direct Daniel in The Mother and Enduring Love..

I just read two articles about the rumor of the next bad boy in Bond 22.. talking about Goran Visjnic (NBC television serie ER)..
Here is the link
http://movies.ign.com/articles/771/771031p1.html
You only live twice or so it seems..
One life for yourself and one for your dreams...And one day I realize that I was addicted to Daniel Craig's blue eyes.

Thanks for this. I can't wait and just hope its half as good as CR.
I'd love them to carry on the story from where CR left off. There were lots of good lose ends to tidy up. I also think that keeping it close to the events in CR will mean lots of anger and angst for poor James to overcome. What I'd also love is to see is all of Fleming's books treated the way CR was. Really only Dr No and From Russia With Love stuck as closely to the original before CR. But as that's unlikely, then as long as they keep taking us somewhere 'real' rather than back to the almost cartoon character we were getting with the last Pierce Brosnan Bond I'll be a happy bunny
Top

Hi! if you want all the latest news for Bond 22, you must go check this site, called MI6, the home of James Bond. lots of new infos there!

If as they say that DC wants Jane Seymour in the next film thats one up for us girls. Plenty a good tune played on an old fiddle.

i hope she makes a cameo
Samuel Adams :
Among the natural rights of the colonists are these: first, a right to life; secondly, to liberty; thirdly to property; together with the right to support and defend them in the best manner they can.
Top

Thanks so much Sophie for the James Bond site - I did not know about it so will check it out on a regular basis - now I see where some information comes from.

Roger Mitchell is a good director from having seen Enduring Love and The Mother and as he knows Daniel well I think it would be a great combination.

As you say Chrissie as long as they keep James Bond real I'll be happy too and don't turn him into some awful caricature (is that how you spell it?) which would be awful!!

Hopefully Daniel wouldn't allow that if he has a say which I'm sure he does have.

Sue
Hi there Daniel fans. Please feel free to e-mail me as I love to hear from others to keep me in touch with what's going on with Daniel!!! He is such an amazing actor, has amazing looks, those blue eyes and a sexy voice!!!
Top

jane seymour fit well as a bond girl as she did before.
Top
Post Reply
25 posts